Teenage Dreams is believed to be the sequel of The Gems: A Magical Adventure. Episodes 3 and onwards started to air on October 1, 2013 until today, September 27, 2021.

The series will not air starting November 28, 2014 due to season 7 of The Gems: A Magical Adventure. The cancellation has caused a big fight on Twitter, even on this wiki. But after Make It In America and season 7, the series will start with episode 19.

Teenage Dreams takes place in Hollywood, and focusing on The Gems' new life as teenagers. They might be 20 years old, but Jewel says that is still considered a teenager (on the website). 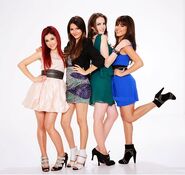 (From left) Jewel, Diamond, Sugar (wearing a wig) and Monica.

The pilot episode, which has been released after the thirteenth episode of season 6.

Jewel sings in the car

Diamond and Avan singing for auditioning to go to Hollywood Arts.
Community content is available under CC-BY-SA unless otherwise noted.
Advertisement